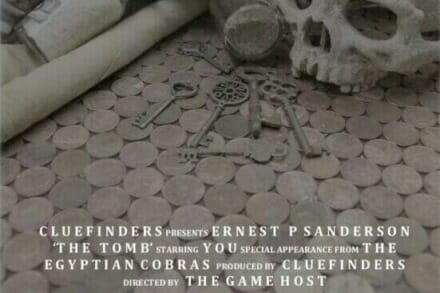 Avid explorer and archaeologist Ernest Peter Sanderson has made the discovery of his life – uncovering no less than 3 tombs, each full of enough treasure to make him rich beyond measure. But before he reaps his reward he discovers a map containing the location of a secret fourth tomb that was thought to only exist in myths, containing a treasure so precious it has never been seen by any living human. Ernest drops everything to hunt down this fourth tomb and bring this treasure home. Unfortunately, this was the last anyone ever heard from him.

This was 50 years ago. Now the map has come into your possession – can you track down the tomb, complete Ernest’s life work and take the treasure for your own?

Our Tomb Room is harder than Remy’s Room. We recommend playing Remy’s Room before you try to escape The Tomb.

Warning: The Tomb, unfortunately, will not be suitable for all guests. There is an element of dark confined spaces within this room, and may involve crawling so we do not recommend this to pregnant women, people who suffer from claustrophobia or anyone over the height of 6 foot (although if you don’t mind a tight squeeze then be our guest!).

Reviews on escape room «The Tomb»